This week I attended my first self rescue practice session to learn how to rescue a follower in vertical terrain. We covered escaping the belay, counter balance and tandem rappels, knot passing 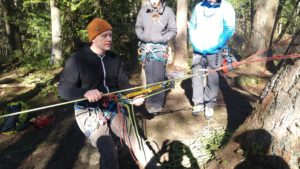 , and raising systems. While I’ve covered these skills individually, it was fascinating to learn how to use them in conjunction with each other while still maintaining proper and clean rope systems. This is a last-ditch effort if you need to bail off the mountain NOW with an injured partner. The main principle for this series of events is as follows.

Ideally you would leave insert this after step 4 in “escaping the belay” as it makes for an easier transition.

This is where things get even more complicated! You need to now transition to another anchor and set up for a full length rappel with an unconscious or injured victim. Once you reach your partner and tend first aid, you will rappel using the same techniques to the second anchor.

This was a great training opportunity to improve my climbing skills and add more tools to the toolbox to allow me to become a more self-sufficient climber. Our next and final practical session of the class will be putting these skills to use in the vertical world! 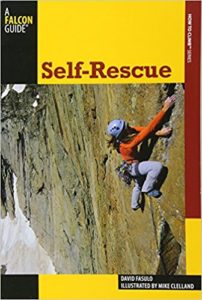 This is one way that I learned the skills today. Please do not use this as a guide as I am a student learning these skills.  If you want to learn more about self rescue, take a course or check out Self-Rescue by David Fasulo.